Today was the first day of school at my new school.
The best analogy I can come up with to describe it is I felt like a cook making a gourmet meal in someone else’s kitchen.
Except, that’s actually a bad analogy seeing as I don’t really cook.
So it’d be more like Emeril Lagasse coming into my kitchen and trying to cook a gormet meal. 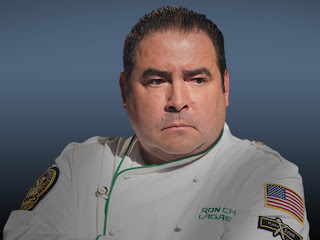 If  Emeril ever did step foot in my kitchen, this is how he would look.
My classroom is still dominated by the previous hoarder who inhabitied it – despite HOURS of work my family (both parents and husband) have put into it along side me. It’s definitely better. Much better. But I don’t function well in an un-organized space, let alone one that was un-organized by someone other than me. It may look really pulled together. But it feels foreign still. And I hate that there is still oodles of stuff crammed into every hidden nook and cranny. Which makes the whole environment a little stressful to me.
Additional stressful moments in my foreign “kitchen” today….
But then when I picked them up at Art (the longest we were seprated all day) I got tons of hugs because “they missed me”. When I called on one girl who had her had up she declared that I was the world’s best teacher. As we were getting ready to leave for the day, one of my boys gave me a huge bear hug. One of the boys who I never would have expected to be the hugging kind. And I overheard one kiddo bragging to his buddy on his way out of the building  that HIS teacher gave them Oreos for snack aaaand a cup FULL of jitter juice.
Those moments reminded me that even though I felt out of my comfort zone, it was still an awesome first day for my new class. And ultimately, if they had a great first day then I had a great first day too!
❤
Oh- and I was a bad blogger with  no pictures to show expect for this cup of Jitter Juice I treated myself to at snack time. 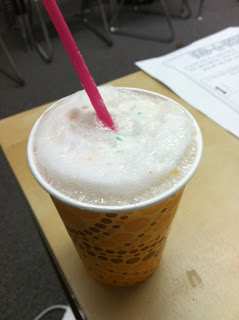 Check out the bubble factor on this stuff-!!
Anyone using Abby’s Jitter Juice activity trust me when I say you do NOT want to skip the sherbert in the recipe. I almost did, because it would have been easier. But I’m SO glad I didn’t. It’s bubble city and the kids LOVED it!
http://feeds.feedburner.com/ FallingIntoFirst