Today was one of those days where I found myself thinking about how much I love teaching!! The fun began when I introduced our shared writing topic for the day and told my class we were just going to have to make applesauce at school so that we’d know what to write about! We have been working on complete sentences since the first week of school. So today, I introduced them to some of the structural elements of a complete paragraph. It wasn’t our learning target focus – our focus was complete a “How To” writing piece through interactive writing. But, I still introduced them to a topic sentence {green}. The details in the middle {yellow}. And highlighted our Conclusion sentence by circling it in {red}. 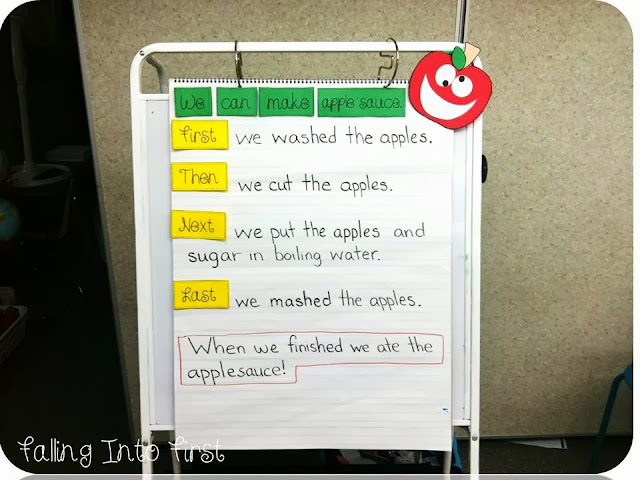 Adoreable apple craftivity from Smitten With First!  My class loved those “kooky” eyes as they called them.

As a class we decided what the steps we wanted to document were…after our applesauce was underway of course! I like this activity mainly because I can easily involve the students in it every step of the way. First, everyone got an apple that they were responsible for washing in the sink. {Our apples were already washed in vinegar by my teaching partner so they were clean as can be, but my kids didn’t know that, and they took their role seriously.} Then, I picked a few students to add water to the crock pot. After that, we peeled & chopped a few apples together and put them into the pot. The rest were chopped and added while they were at specials, which they were fine with. 🙂 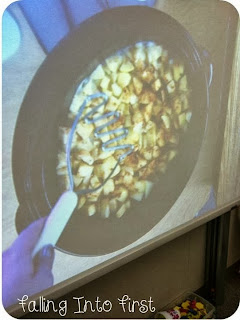 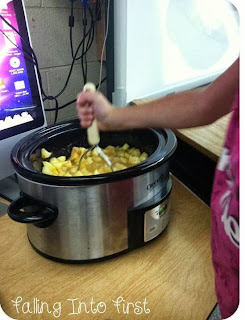 Once the apples had simmered over specials I called the class to the carpet and set my document camera up so that it was looking right into the pot. Then I could project the live footage onto our pro-board! I had one sweetie add a cup of sugar while I added some cinnamon. Then, I called them up a few at a time to start mashing the apples. Throughout the day, different people got to come mash until everyone had gotten a turn. We let it cook most of the day but about an hour before scoop time I switched from cooking on high to just keeping it warm. About 15 minutes before go time I scooped into cups and put the cups in my fridge to cool down.

But before we got to eat the applesauce, there was work to be done! Like graphing our favorite colored apples. 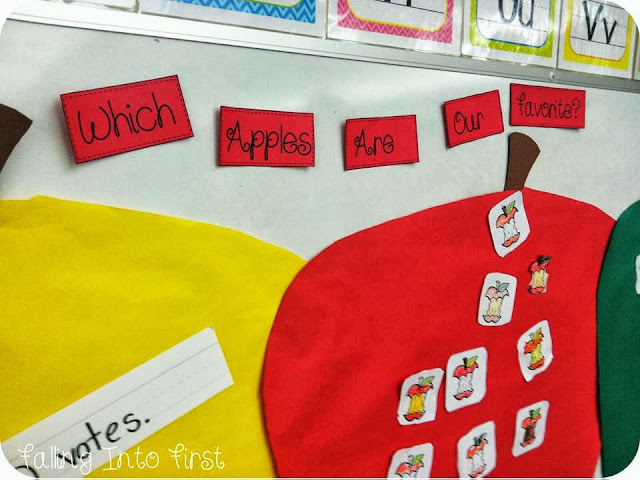 Poor yellow, he always gets left out. But I can’t blame them. Red is my first choice too!! This is always one of the easiest graphs we do all year, so it’s good that it comes near the beginning. Some might argue this is too kinder for first/second – but – I don’t use this graph to teaching what a graph is. I use it to identify how we use the data on our graphs to make conclusions. “Data” and “Conclusions” are BIG words that I want my students to understand early on. We noted there were three distinct points we could conclude from our data, and put them into COMPLETE SENTENCES!! {Since that has been our FOCUS in writing for the past five weeks!} You can see the sentences that they decided upon below after discussing with their table teams and then all together as a whole group. 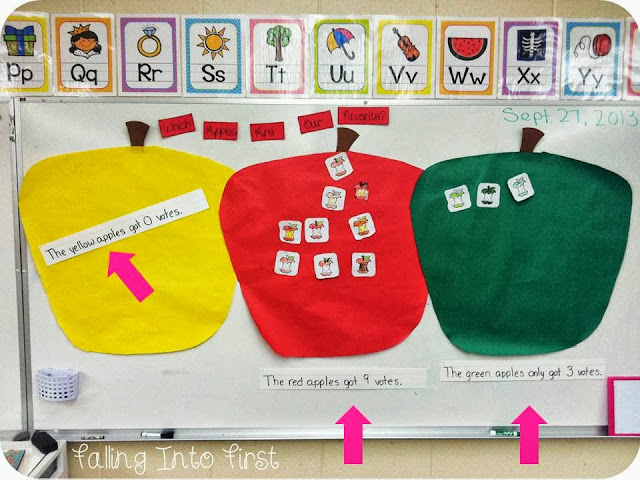 Then, they picked one of the data points to write in a complete sentence on their paper. 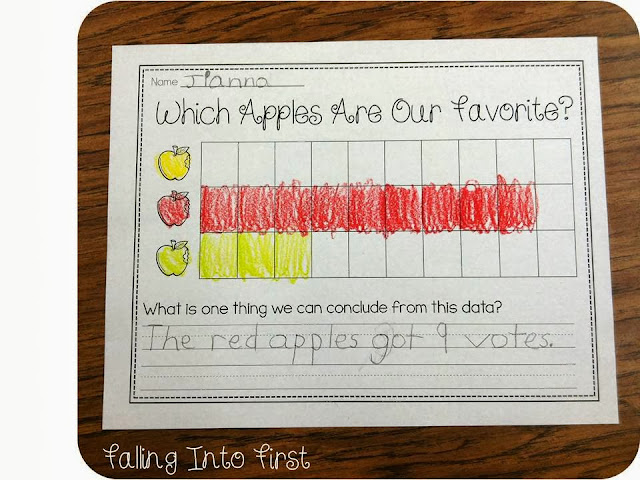 We finished our Shared Writing… 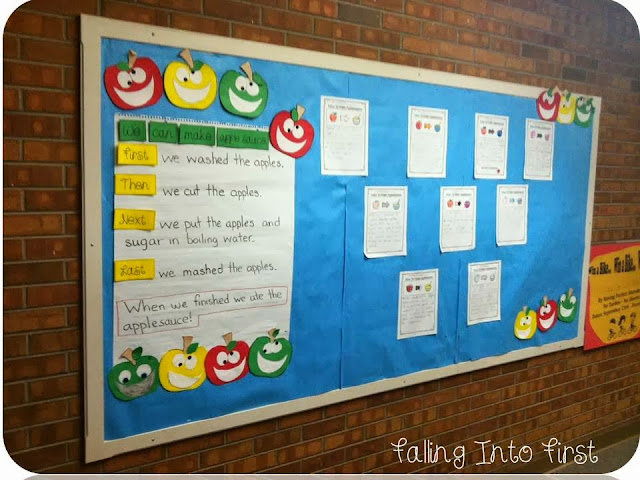 I hate the lighting in our hallways. It always looks like it’s 8:00 at night in pictures. Every time. Boo!! 🙁

And discussed Character Traits and Setting with this adorable new find of a book!! Bad Apple is the story of an Apple (Mac) and how he gets bullied by all the other apples in the orchard for having a Worm (Will). But, Mac and Will are best buds, despite what the crab apples have to say about it 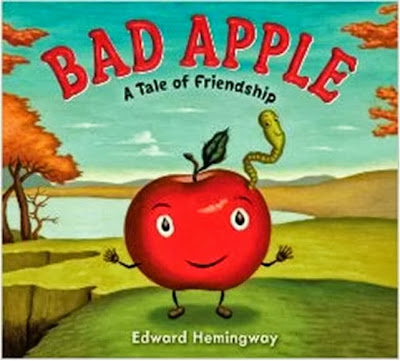 Yep, I made these guys work for that sauce. We didn’t actually eat the applesauce until the last 20 minutes of the day. But when we did, it was DELICIOUS!! Yes, I had a heaping serving right along with the kids. Can’t beat the home made stuff! 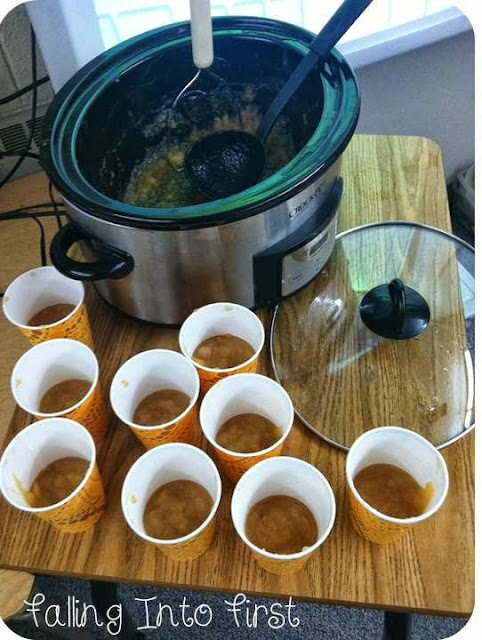 This was the perfect day to wrap up the on-going apple theme in our room the past two weeks. I hope this post hilights the variety of standards that I was able to cover in the midst of all the apple fun. Nothing makes me happier than find fun and creative ways to tie them into everything that we do!
Now I’m ready for my FAVORITE month and season.
October. Fall. Halloween. All things Pumpkins.
http://feeds.feedburner.com/ FallingIntoFirst

Love Monster ❤️ is ready to get students think

Tomorrow is Groundhog Day! 📢🦫 If you need so